Imagine sitting next to your wife at her 6-week check-up after having an unruptured brain aneurysm coiled and stented. The doctor shares the news that her scans look really good, which usually means she won’t ever have to worry about it again. But without even a moment to bask in that wonderful and amazing news, your phone rings. It’s your doctor. You have cancer. This was Ryan Switzer’s reality.

Ryan, a young father and husband, was fit, active and training for a triathlon when he recognized that something might not be right. After receiving the news that he had Stage II colorectal cancer, he enlisted the doctors at Duke Cancer Institute, to help him fight his battle head-on. They offered him a spot in a new clinical trial and he jumped at the chance to participate. The treatment was intense and included chemo, daily radiation, drug studies and a total of nine surgical events. But going through all of that was worth it when Ryan learned he was finally cancer-free. 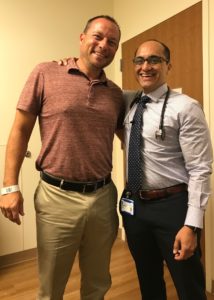 From the phlebotomists to the nursing staff and the team of doctors and specialists, Ryan credits the talented team at Duke Cancer Institute with helping him through such a difficult time. And he is certain that his cancer-free diagnosis is thanks to the incredible research supported by organizations like the V Foundation. Grants are funding research that leads to early diagnoses, better therapies and more lives saved.

After winning his battle with cancer, Ryan was determined to give back and get back to his active lifestyle. He got back into swimming, running and biking, starting with some 5K runs with friends and family. From, there he completed a triathlon and didn’t let anything get in his way. He even finished multiple Ironman competitions with the support of his wife and two daughters. And he’s done all of this while also raising money and awareness for local cancer support groups. 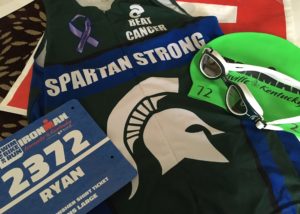 Ryan has signed up for the Victory Ride, and on May 19 he’ll ride 100 miles toward the ultimate goal: victory over cancer! His advice for other riders?

Set up your online fundraising page first—that’s where you’re going to send everyone to donate, and you’ll want them to see the details of your story. Social media is very effective, and I like personal messages and phone calls, but nothing can compare to asking in person. It takes a lot of effort, but it’s important to follow up until you start to see donations coming through!

We applaud Ryan’s commitment to cancer research, and we are incredibly happy to have him on our team. As his daughter, Emerson, says, “No matter what, Love is by your side with her best friend, Hope! Together, we can beat anything!” Let’s continue working together to raise money for cancer research, clinical trials and cutting-edge treatments to give more cancer patients a happy ending like Ryan’s.