The Victory Ride Provides Hope for Doctors and Patients Alike

The V Foundation for Cancer Research’s Victory Ride to Cure Cancer presented by Braswell Family Farms is no ordinary bike ride. The ride celebrates survivors. It honors those we have lost. The Victory Ride gives everyone – from avid cyclists to people who’ve never been on a bike before – the opportunity to come together as a community to defeat cancer.

The ride brings people together. It can even provide an opportunity for a cancer survivor and one of the doctors who treated him to celebrate together.

Robert Russell was diagnosed with advanced HPV with squamous cell carcinoma of the larynx in 2014 and spent most of 2014 and 2015 at Duke Cancer Institute. Thanks to some wonderful treatment from a great team of doctors at Duke, Russell is now cancer free. However, treatment didn’t solve everything for Russell. Tough side effects and a cloud of the cancer returning hovered over his head until he found a hobby that helped get him through the tough times: getting on his bike. 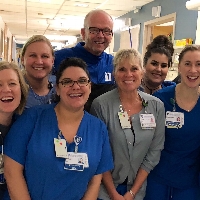 “Through all this, my personality changed a bit, and biking really fixed that,” said Russell. “My wife, Kristi, says getting on my bike is the best thing that’s ever happened to me. It has really calmed me down.”

Russell will participate in the 60-mile ride this year. Despite never having participated in an organized ride before, he said he could not be more excited.

David Brizel, M.D., of Duke Cancer Institute, was part of the team that treated Russell. He is also an avid rider and loves getting on his bike as a way to stay fit physically and emotionally.

“The Victory Ride provides the perfect opportunity for me to voluntarily challenge those skills and simultaneously honor the involuntary challenges that my patients face in their struggles against cancer,” said Brizel.

He will also participate in this year’s Victory Ride, so one of the faces Russell will see the morning of the ride will be one that helped save his life.

“I am honored and privileged to be able to share such a special moment with him that validates all of the blood, sweat and tears that he went through to be able participate in the Victory Ride,” said Brizel. “It is truly a celebration of life.”

“I know some of the money raised for research saved my life,” said Russell. “Five years ago, I couldn’t walk up a small flight of stairs. Now, I’m riding 30 miles. I love it.”