A cancer diagnosis can still be devastating, but thankfully, due to improvements in treatments brought about from more funding for cancer research, we see more survivors every day.

That was the case for Rick Rutledge, who was diagnosed with a brain tumor in January 2013. Luckily, he had a wonderful team at Wake Forest Baptist Comprehensive Cancer Center, and after surgery, radiation and chemotherapy, he was able to get back to life.

That life had always included running, but before his diagnosis, his longest race was a 10K. He’s now run full marathons, half-marathons, 50K trail runs as well as riding in multiple Victory Rides. He not only didn’t let cancer slow him down, it sped him up. He’s also been committed to raising money for cancer research. 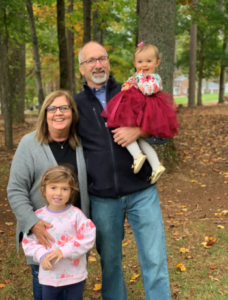 “I started raising money for the V Foundation in 2014 when a friend and I signed up to run a marathon in Raleigh as part of Team V,” said Rutledge. “When the Victory Ride started in 2018, I got my bike out and started riding.”

Another positive that came following Rutledge’s recovery was he found himself more outgoing, enjoying not just the run but meeting new people and talking to them about supporting research.

“My wife and I just make a whole day of the Victory Ride. We enjoy hearing other survivors’ stories, talking to the volunteers at the rest stops and with other riders. I really enjoy the whole day,” said Rutledge.

“As a survivor, I think I’ve already had a victory,” said Rutledge. “I was the best man at my son’s wedding. I got to walk my daughter down the aisle and dance the father/daughter dance with her. I got to celebrate my 40th wedding anniversary. I am watching my granddaughters grow up.”

Turning more cancer patients into survivors and letting them experience these amazing life moments sure feels like Victory Over Cancer® to us.